Here is what the director and chief engineer for NASA’s Dawn mission, Marc Rayman has to say about it at www.jpl.nasa.gov:

“… [f]or JPL’s highest accuracy calculations, which are for interplanetary navigation, we use 3.141592653589793. Let’s look at this a little more closely to understand why we don’t use more decimal places. I think we can even see that there are no physically realistic calculations scientists ever perform for which it is necessary to include nearly as many decimal points as you present. Consider these examples: 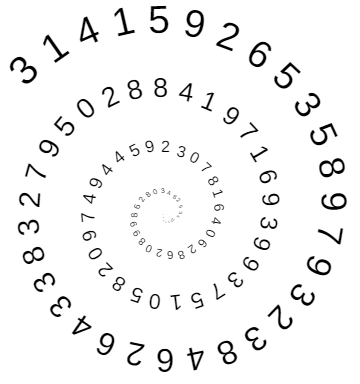 Do you want to know at what π digit you can find your birthday?

… you can create art with a programming language?

Fall In by Clayton Shonkwiler

Please view his work at http://flotsam.sellingwaves.com.

It exceeds the 1080 atoms in the universe! We know the answer because of the work of Stefano Martiniani and his colleagues at the University of Cambridge in the UK.

Follow this link to a New Scientist article about how they arrived at this result.

… someone has photographed an atom?

The photo taken by David Natlinger is titled Single Atom In An Ion Trap. The image of a single atom of strontium suspended in a strong electric field was captured using an ordinary digital camera on a long exposure shot. The radii of a strontium atom is just around 215 billionths of a millimeter!

View this stunning photo in this article from the New Scientist.

… where zero comes from?

Brahmagupta was one of India’s prominent mathematicians and astronomers. His major treatise Brahmasphutasiddhanta (“Correctly Established Doctrine of Brahma”), published in 628 AD, addressed various mathematical concepts, like rules for summing series (for example, 12 + 22 + 32 + … + n2 = n(n + 1)(2n + 1)/6), or rules for operations on negative numbers (for example, 5 – 7 = -2). He also described methods of multiplication based on the place-value system similar to the multiplication algorithm we use today.

But first and foremost: Brahmasphutasiddhanta is the oldest known text to define zero as a number  resulting from subtracting a number from itself, like 9 – 9 = 0. Brahmagupta called it sunya. He also defined zero’s role by explaining the rules for operations in a base-ten number system. Can we imagine how cumbersome a number system without zero would be? Think Roman numerals!

Thank you for the zero, Brahmagupta!

… there was a pancake calculator?

Students at the University of Sheffield in the UK have developed a formula to prepare the perfect pancake. Yum!

… February 11 is the International Day of Women and Girls in Science?

This date was voted by the United Nations General Assembly as a day to celebrate the work of women scientists  and re-energize our efforts towards gender equality and full participation in science for women and girls.

… a new biggest prime number has been recently discovered?
Discovered by, of course, a computer in a Memphis church! It has 2,324,9425 digits.
These are just the first 150 digits or so:

Please follow this link to a New York Times article with interesting facts about  the discovery of 277,232,917 – 1.